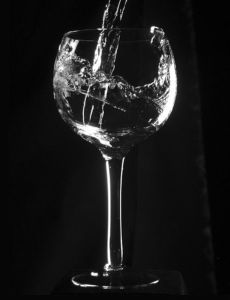 Hello friends! The question for today is “Do we really need to drink eight cups of water a day?” If you’ve ever asked yourself this, you’re certainly not alone. Query nearly any search engine, and you’ll see that nearly 3 million other human beings also want to make sure they’re hydrating correctly.

The short answer from the experts is no, there is no absolute requirement to drink 64 ounces or more (which comes out to roughly 8 glasses) of water every single day you’re on the planet.

Scientists and nutritionists unanimously agree that water is critically important, but rather than insist on a certain number of ounces, they now say that healthy people can get the proper amount of daily water by drinking and eating properly.

Essentially, these well-trained brains say people should drink when they’re thirsty (primarily – but not exclusively – water) and eat a balanced diet when they’re hungry. Combined, they say, these actions will keep your body properly hydrated.

First off, it turns out that the notion of drinking 8 glasses of water a day isn’t so much fiction as it is non-fiction based on misunderstood science. Medical editors from Harvard University and others report that the math behind this recommendation dated to the 1940s when the National Academy of Sciences published a recommendation for people to consume 1 milliliter of fluid for each calorie burned each day. Surprise! This adds up to a little over 8 cups daily for a typical 2,000-calorie diet.

The “8 cups” part definitely caught on, but the rest of the recommendation was ignored; that early statement went on to say that most of this daily fluid requirement could be obtained through liquids present in foods.

The “8 glasses a day” requirement took deeper hold in the pop culture zeitgeist through a 1970’s-era diet book penned by low-fat guru Nathan Pritikin and was further cemented by Pritikin alum Ann Louise Gittleman, PH.D., a certified nutrition specialist who penned The Fat Flush Plan. This mega-hit, which spent years on the New York Times bestseller list, was based on a detoxification regimen to improve fat burning. Gittleman’s plan includes a number of specific steps, but had at its core a requirement to consume eight glasses of a cranberry-water combination every day. This, she claimed, would reduce water retention (bloating), lose fat, cleanse the lymphatic system, and diminish cellulite. 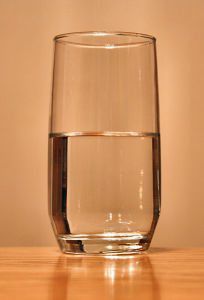 About 66 percent of the human body is comprised of water. This water is controlled by our kidneys, which flushes out water, salts and other solutes. If we drink too much water in a short period of time, the kidneys get overloaded; they can’t flush it out fast enough so our blood becomes waterlogged, a medical condition known as hyponatremia.

This excess water ultimately leaves the blood and enters the cells, which swell like balloons to accommodate it. Although cells in tissue areas are flexible enough to stretch and accommodate this occurrence, tightly packaged brain cells have no room to expand, thus causing the brain to swell. In turn, this can result in seizures, coma, respiratory arrest, brain stem herniation and even death! Studies show nearly one-sixth of all marathon runners develop some degree of hyponatremia, and we’ve all read horror stories of deaths that have occurred from drinking too much water. Including the tragic story of a 28-year-old California woman who died in 2007 after downing about six liters of water in just three hours for a radio contest.

Despite the fact that a number of scientists now present evidence that there’s no clear evidence that drinking increased amounts of water provides a quantifiable benefit – and despite several high-profile instances where people have actually died from drinking too much water, many fit individuals will never give up their water.

At the end of the day, the best recommendation for healthy people is pay attention to their bodies and drink when they’re thirsty. If you’re sweating and exercising, drink enough to replace what you’re sweating out. How will you know? It circles back to body awareness.